The Dubai Airport (Dubai International Airport)  is one of the most illuminating beacons of mega structures which resembles the idea of man’s great achievement on building structure. It is the largest and fast growing airport around the globe and intends to be the no.1. Billions of dollars are expended to keep it more favorable to the travelers across the world over its competitors like Singapore, Hong Kong and London. It is the crossroad of the world’s commuters.

In 937, the journey to the civil aviation of Dubai started by signing an agreement with Imperial Airways> Over the years the growth of travels and new airways addition makes the authority to rethink about future of aviation in Dubai. The sovereign, Sheikh Rashid bin, Saied Al Maktoum, ordered the construction of the airport in 1959. Officially opened in 1960, the airport handled only a few airlines. However, in 1965 the completion of 9,200 ft asphalt runway turnover the whole situation of Dubai International Airport. Only in 4 years they accommodated 9 airliners flying across 20 different destinations. In continuance of the improvement of the airport, in the mid 60s there were many extensions build as well as new buildings and upgrade of equipments like VHF omnidirectional range (VOR) and an instrument landing system (ILS) were established. By the year 2012, there were many expansions and updated made over the time for the travelers to attract and enhance the safety and comfortless.

The Dubai International Airport has four terminals with several concourses.

Terminals 1, 2 and 3 are the passenger terminals. They are directly connected to the main transit area of the airport. The go-between time from terminal 1 to terminal 2 is 20 minutes and to terminal 3 is 30 minutes.

It covers an area of 5,600,000 sq ft and capable of handling 38 million passengers annually. Originally built to accommodate 28 million passengers, later the terminal built concourse C for space of the travelers. Also, there is a construction undergoing to build concourse D to fulfill the need.

It was built to accommodate 10 million passengers over an area of 510,000 sq ft in 1998. The terminal is mainly used 50 airliners and is the main hub of Persian Gulf region transports. In 2009, the terminal underwent many expansion to house 5 million more passengers.

This is one of the main and most fascinating terminals of all. At the expense of 8 billion dollars, the terminal was built for Emirates Airlines. It has two concourses: concourse A and concourse B. Al total of 47 million passengers is capable of accommodating in this terminal. The terminal itself is a city with multi-underground levels. It has 5 Airbus A380 gates, lounges, restaurants, over 2,600 car parking spaces and for the flexibility of passengers an 180 check-in counters.

The Cargo terminal of the airport is one of a kind. It is competent to handle 3 million tons cargo per year.

The Dubai International Airport has two immense runways that send hundreds of airlines across the globe. It was recently expanded to house the A380s. The runway is equipped with modern aviation technology to safely land airlines in a worst environment.

The Dubai International Airport is one the most luxurious airport. All three passenger terminal are well equipped with restaurants and outlets of many brands. Passengers can spend the time very fondly in cases of delay or cancelation of airport. The metro and bus services transport the passengers between terminals. Also, the airport provides the necessity maintenance equipments and personals to look after airplanes. Several hangers (includes handling A380), fuel test system, painting and spare parts stores are available in the airport.

The Dubai International Airport is the guiding light of achievements of manmade structure. Over 63,000 people all over the world keep their hands busy to keep the airport secure, scheduled and easy going for the travelers.

Where is Dubai Airport ?

Dubai International Airport (DXB) is located in the Al Garhoud province about 4 km east of Dubai and is managed by the Dubai Airports Company and is the home base of Dubai’s worldwide aerial transports, Emirates Airlines, Flydubai Airlines and Emirates Skycargo Airlines. 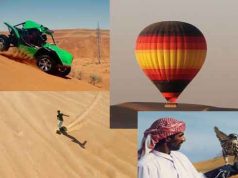 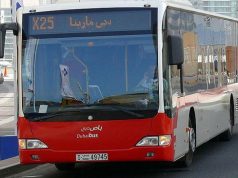 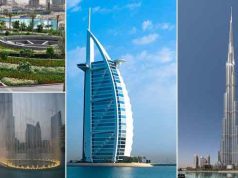